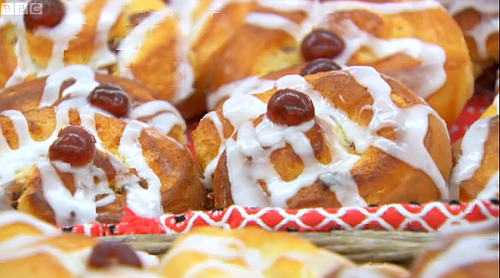 Today I caught up with last night’s The Great British Bake Off, which featured the remaining 7 contestants baking with sweet dough.

Cue the puns about buns.

Should you be an avid baker or not, the names of some of the yummiest buns are actually worth a look.

The recipe for Lady Arundel’s manchet goes back to the 17th century and their home shire is Sussex. It was of particular popularity amongst the aristocracy of the time, but these days they’re rarely seen – with cookbooks favouring the likes of the Bath bun instead.

Now, there is a market town in Sussex called Arundel famed for it’s castle. It’s name comes from Old English and means horehound (a herb) -dell. A second theory about the origins of the name is that it could also derive from Old French and mean little swallow.

Chelsea buns are one of the more famed buns available and indeed, my own mother baked a batch just last weekend. They originate from an 18th century bun house in Chelsea. The process involved in making them is remarkably similar to the even-better-known cinnamon swirl with one of the major differences being that currants are part of the mixture and chelsea buns tend to be more of a square spiral than a circular one.

Chelsea is also the name of a famed football team currently owned by Roman Abramovich and based in a borough of London. In the mid-20th century the borough of Chelsea became quite a fashionable area of London, and thus this may have inspired parents to use the name. Chelsea comes from Old English and means landing place.

Chester buns are from Cheshire, and are typically classic sweet yeasted buns made with condensed milk and topped with sugar.

Another place name (and one we’ve mentioned before), the town of Chester can be found in Cheshire, which is just east of North Wales. The name again derives from Old English and means fort.

The Colston bun was named after Sir Edward Colston and it’s traditional homeland, so to speak, is Bristol. The bun is flavoured with candied peel, spices and dried fruit.

The meaning of Colston took a little bit of effort to track down, even despite myself living not so far away from the little town of Colston Bassett. Cheese fans may know of Colston Basset, since it is one of only 6 towns with the permission to make Stilton cheese.

Now, here’s where a little local knowledge of mine comes in. The town of Colston Bassett is literally just down the road from a town named Cotgrave which was once home to a big coal mine; indeed the roads connecting the two are called Colston Gate and Colston Road.

Since the similar name Colton is known to derive from Cole, a name that means coal, then one could argue that Colston also has a meaning linked to coal, with the tun part meaning settlement/town. However, the theory comes a little unstuck by the addition of more local knowledge: the coal mine at Cotgrave was active from the 1950s, long after Colston Bassett came into being.

That said, after devising my theory I did come across a website or two which seem to believe that Colston does indeed mean coal town, so I shall rest my investigation here for the time being.

These buns rock, because Swedish tradition dictates one particular day of the year for their consumption: St. Lucy’s Day (13th December). As you may well be able to guess, these buns are flavoured with saffron (as well as either cinnamon or nutmeg) and tend to also contain currants.

Back in England, we traditionally cooked these delights on Sycamore leaves, I kid ye not.

So basically, my name is an ode to the saffron bun; if that isn’t a conversation started, then I don’t know what is.

One of the most expensive spices available, and a particularly vibrant shade of yellow which gives the saffron bun it’s colour. Yes, you guessed correctly, many bakers add food colouring to their saffron buns to compensate for being too tight-fisted with the saffron.

The Sally Lunn buns are another bun favoured over the Lady Arundel’s of yesteryear. It comes from Bath, and if you were to visit the quaint city you’d stumble across Sally Lunn’s house which, predictably, serves this delightful treats.

Whether Sally Lunn existed or not is subject to debate, although one theory goes that another lady called Solange ‘Sollie’ Luyon brought the recipe to Bath from France. There is also the theory that Sally Lunn was simply rhyming slang for bun.

Whether the bun’s namesake existed or not, the name Sally is a long ago penned nickname of Sarah, that these days is almost her own name.

Sibset of the Week: The Drewitt-Barlows

Barrie and Tony with their children, l-r: Saffron, Dallas, Orlando, Jasper and Aspen.

This week we’re looking at the children of two well-known gay parents in Britain. Since 2004, it has been legal in the UK for a gay couple to enter a civil partnerships, and recently it has been fiercely debated as to whether to extend this to marriage as well.

Barrie and Tony have been quite prominent in the fight for equal rights. They first came to prominence in 1999 after they travelled to the US in order to become parents. This was followed by a ruling by an American court, making their eldest two, twins, the first British children to be registered as having two fathers and no mother. They then had to battle to bring them home to Britain.

Since then, after the birth of their twins, they went on to have three more sons – including another set of twins:

Name Spot of the Week: The Fool Strikes Again

Contestant from Junior Bake Off, Stanley, from eadt.co.uk

You’d think I’d be a pro at this blogging malarkey nowadays, but I somehow managed to leave for work last night without clicking the publish button. Since I didn’t actually get back until past midnight, I decided to be lazy and go to bed rather than provide you with your daily fix. Patience is a virtue, as my father would always annoying remind me, so hopefully I still have some readers out there 😉

Either way, onto the post. I caught another glimpse of Junior Bake Off this week, the kid-orientated version of BBC’s smash hit The Great British Bake Off. The one I watched a few minutes of the other day featured four young ‘uns named Jacob, Katie, Conal and Coco-Nina. Some other notable names from the series include:

Speaking of television, there was a girl named Charis this week on Pointless who pronounced the first syllable of her name like one would say the first syllable of Karen. There was also a Lauren and Lauren III pairing who were both male, which reminds me that Laurence is a female name in France. On the subject of the French, Bree stole my heart with her list of French word names earlier on this week.

It’s slightly late, but Kate Silverton welcomed a daughter she named Clemency Florence Rose recently. David Cameron famously welcomed Florence Rose Endellion earlier last year, so Florence Rose is clearly a combination to keep an eye on. I’m still not entirely sure which name I prefer out of the two, given that I love both. There are plenty of -ce names out there right now, such as Alice and Beatrice, which are enjoying plenty of popularity.

My favourite outraged Daily Mail article of late has been about a couple’s messy divorce. A couple with four daughters named Arabella, Kitty, Lucy and Georgia. They also have a son with the delightfully complicated Ruaraidh.

There’s a girl on the news called Birdy. How apt given ‘yesterdays’ post!