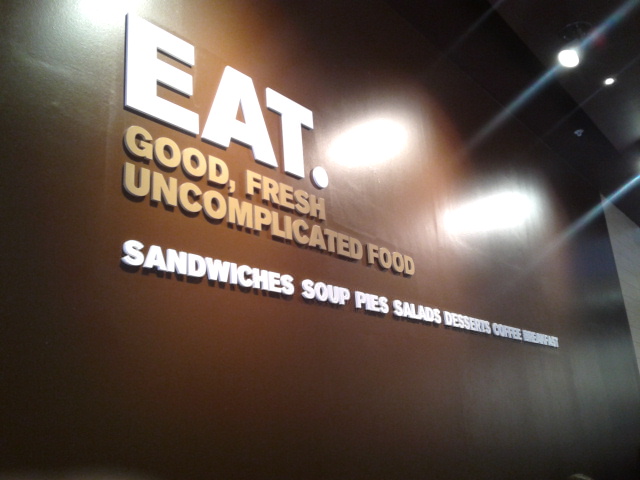 Since I shared this photo in last week’s Spot post, I’ve been thinking about the Eat ethos, which is good, fresh, uncomplicated food.

What would be the naming equivalent?

Let’s break it down.

Fresh is often used (and I’m particularly guilty of this one) as another way to say unusual, but one could also see it as a name that hasn’t been overexposed.

In the end I settled for 4 set criteria for a name to pass this category and go on to the next category. For a name to be fresh in my eyes, it must not be:

Taking this into consideration, names that fail this category include:

For a name to be good, I believe it has to have little negative connections such as an evil forebearer (whether fictional or not) or less-than-lovely meaning.

8 names that would fall down at this hurdle, but would’ve passed the previous category include:

What makes a name complicated? One could say it is a name which causes little spelling/pronunciation issues, such as James and Ruby.

8 names that fail this test, but passed the previous two include:

So, without further ado, here’s the list of  some of the names I think  pass all three tests:

Do you dispute any of these choices? Are there any names you think qualify too?

I’ve become hopelessly addicted to Masterchef of late, and there was a contestant on the currently airing series called Aki. She caught my eye since she rather reminded me of myself, we even sharing a love of science- with her doing a PhD in Quantum Physics.

Her name caught my attention too: Aki. Said much the same as Hackey, sans the h. Or at least, that’s how they were saying it on Masterchef. The name, much like the contestant, is from fair Japan; it means sparkle, bright, autumn – a delightful trio of meanings (indeed, one for each letter).

What I like about Aki is that she’s a quirky, short Japanese name. I’ve covered a few over my time on this blog, but there are so many more delights to see. Here’s a quick selection of 10 of my favourites:

I knew an Aya at primary school, and she said her name ay-ah. However, she was of Arabic origins, and Aya is a name derived from Arabic, meaning verse, sign, miracle. An alternative pronunciation I see is eye-ah.

Whilst it is the French word for cabbage, they do also use this as an endearing term in France – much like how I fondly call people duck on a regular basis, or chick.

Emily is still hugely popular here in England&Wales – she was at #3 in 2010. Emi acts as a potential short form of her, or indeed a relative, say, Emma. Or Emmeline. You get the picture.

The name Mitchell started off life as a surname, but I’ve met two young lads with him as a first name over the past month or so – one of whom answered to Michi. I’ve seen that it’s also of use in Japan as a male name – and in the case of both genders, it’s a frequent nickname option over there too.

Reported as being currently very popular in Japan for girls right now, whilst Wren is on the receiving end of heightened interest.

Spelt Rico this name is a masculine nickname in Italy and Spain.

Rio de Janeiro is due to host the 2016 Olympics, and rio is well-known for meaning river in Spanish. Whilst there is lively debate as to the gender of Rio in the English speaking world, in Japan this name is first-and-foremost feminine.

I’ve always had a soft spot for Suki, and this name is equally as sweet. She rather looks like a short form of Sakura, and I guess could be used as such if one’s heart desires it so.

A name previously covered extensively in a names of the week post, alongside Gem.

Yes, she does rather look like the English word yummy, and point of interest, the French translation of the word is miam miam. However, the name is pronounced with a long oo sound.

‘Beatrix/Beatrice Has No Decent Nicknames’

A rather artsy picture of mine taken on a beach. The same beach as the background photo, I believe.

I’ve been planning a post along these lines for a few weeks given how much love both versions of this name get on the ‘boards, but recent conversations have suddenly made it a very topical post for me to write about since I had a friend say the above statement to me today. I found myself initially agreeing with her, in that the obvious two have never really ‘rocked my boat’ – and when I say obvious two, I’m talking Bea and Trixie. This post therefore goes out to my friend who is at a sticking point with her relationship with Beatrix, and thus this post is likely to be a bit of a shambling walk through my mind as ideas pop into it.

My problem with Bea is quite simple: I want to give it two syllables and rhyme it with Leah. Proof even we ‘pros’ still have issues with pronunciations. If I were to use Bea, I would insist on it being spelt with two ‘e’s, hence, Bee. I remember once doing a monologue about a cat called Bumblebee, and I actually prefer Bee as a short form for Phoebe, Thisbe or even Belphoebe. This is what I spend my days thinking about. That and wondering why UCAS hates me.

It seems rich of me to not particularly like Trixie, since I’m actually a closet Pixie fan. I’m not sure if I’ve ever made this clear, but I plan on changing my middle name sometime in the future because I just can’t agree with it, and Pixie is actually one of the names in consideration. Alas Lucy Pixie is borderline cutesy. I guess you could use Pixie as a nickname for Beatrix should you so choose. Jacqueline Wilson gave one of her characters, in her novel Diamond Girls, the name Dixie. It could work, but the slang of today makes it nigh on impossible. Dixie’s sisters were called Martine, Jude, Rochelle and Sundance. Their mother? Sue.

We mentioned a Beatrix who goes by the name Betty last week, and I maintain that it’s a fantastic interpretation of Beatrix, as indeed are her the names of her siblings. As an extension of Betty, there’s also several other Elizabeth nicknames which could work, specifically Betsy, Bets and maybe Elsie at a stretch. Could Beth work as well? Maybe, I think nicknames really are an open arena.

Kristen mentioned on her guest post over at Nameberry today the possibility of using Birdie as a nickname for Beatrice, and one could take things further by suggesting the slightly re-arranged Bridie. It also reminds me that I think the name Beatrix looks a lot like the word biscuit – that may say more about my inner psyche than I really want people to analyse (did I mention I had a psychology teacher pin me down as an affectionless psychopath a few weeks ago for smirking during a video on violence?). There’s a French film, titled in English A Very Long Engagement, which featured a WWI soldier named Biscotte, which translates to the English word rusk. I think it mentioned in the film why he was named so, but I fail to remember exactly what the backstory behind it was.

Simply using the end three letters of Beatrix could work, and there are several other ways to exploit Rix, first off by pulling off some letterphilic substitution to create Ria, or indeed the very jazzy, yet slightly gender neutral depending on your interests name Rio. When I say depending on your interests, I’m talking about the song Rio (her name is Rio and she dances….) and the footballer Rio (Ferdinand). There’s a Japanese name, Riko, which is also worth considering. It can either mean child of truth or child of jasmine. The Spanish name Rico is a shortening of Ricardo. Rix also could go to Ricky/Rikki/Ricki, or if you’re feeling very brave, the word Risk.

Specifically targeting Beatrice, and going back to my favourite sport, we could put forward the case for Becks, or simply Bec(k). That therefore opens the door to most of the imaginable Rebecca nicknames – I know a Rebecca who is most often referred to simply as Rebs. Simple, yet effective. Another simple option is Rae, or even Bay. I promised myself as a child that I would always live in a country with a coastline, and always be at least 2 hours away from it. I love the beach, specifically what one finds at a beach; we’re talking good ol’ fashioned British seasides here, not palm trees etc. rather donkey rides, piers and rock. Just to give you a scale of my seaside addiction, over the summer period I visited no less than 6 seaside locations in England and won a game of mini golf at each one, so Bay’s a nice way for me to acknowledge that I have this addiction, and plan to pass it on to up-and-coming generations. You can splice Bay and Rebs together to get Babs, which was the name of one of the chickens in Chicken Run, set up north in Yorkshire and made by those who gave us one of the best comedy duos: Wallace and Gromit. As a rather unexpected finale, if you love cats but dislike the name Tabitha, there’s also Tabby as an option.

There ya go friend of mine. Proof there are some great possibilities for nicknames of Beatrix/Beatrice if you put some hard thought into it. Or just read this post and nick one of my ideas, in which case fair enough. That’s what the internet is for.