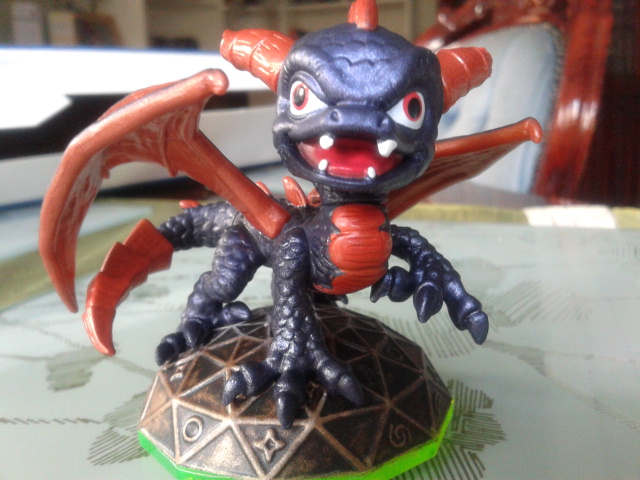 Now, I’m a huge fan of the Spyro video games, moreover, the original PS1 set of games that to this day see plenty of use. Recently I cracked, and joined the Skylanders hype. What is Skylanders? It’s the new Spyro game which integrates toys with video games – you basically take this plastic figurine of Spyro or friend, stick it on this ‘portal’ thing plugged into the console and voilà, the character is introduced into the gameplay. So far, my brother and I have found this of great use for when we’ve almost killed Spyro as we can quickly swap to another figurine with full health.

There are 30 of these figurines which are all called Skylanders, and I thought I’d shared with you some of their names:

Boomer – a troll character, of the tech elemental

Camo – a plant/dragon hybird, of the life elemental

Cynder – a once dark dragon, of the undead elemental

Dino (-Rang) – a dinosaur, of the earth elemental

Gill – a gill-man, of the water elemental

Terra(fin) – a shark, of the earth elemental

A couple of other names of characters which appear in the Skylanders game:

Auric – a bear, who appears to be based off Moneybags from the original games

Cali – a cat you rescue early on in the game

Flynn – the hot-air balloon-piloting character from the earlier levels

Hugo – the assistant who guides you through the game

Persephone – the fairy, who seems to be based off Zoe from the original games