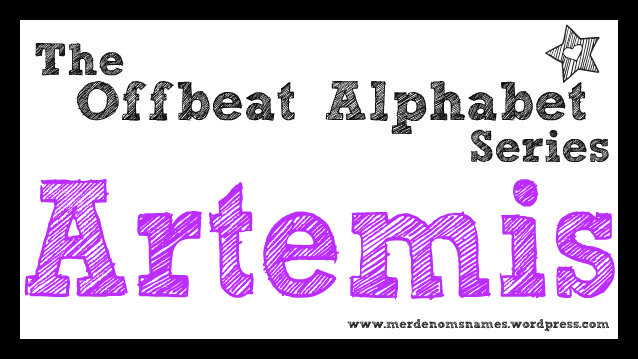 Welcome to the first post of many in our Offbeat Alphabet Series, and we’re starting with a name I’ve been dying to properly cover for a very long time. This is a case of a draft sitting in my pending pile for an embarrassing number of years (basically when this blog started way back on Blogger in May 2010, that’s over 4 years).

It seems apt then that I kick the procrastination bucket and actually post this. So, hello Artemis. Hope your wait wasn’t too much of a bore.

The name Artemis is a Greek name with a disputed meaning and a side-line gender crisis. So, naturally, I’m a huge fan.

When most hear the name Artemis, they likely think of the Greek goddess who presided over hunting, the moon, childbirth, wilderness, virginity and maidens. According to legend, she’s the daughter of Zeus and Leto, and has a twin brother by the name of Apollo. She is often depicted wearing a crescent moon on her head, and always carries her bow and arrow. Deer, bears, hunting dogs, and cypress trees are especially sacred to her.

In Roman Mythology, she was known as Diana. This lead some to speculate that the Duke and Duchess of Cambridge might use Artemis as a middle name for a daughter to honour his mother. Personally, I feel it’s more likely that they’d simply use Diana.

It may seem odd that a Greek goddess’ name might be used as a male name, but there’s precedence for it, never mind the fact that two of the most prominent pop culture uses of the name are male.

For example, the Greek goddess Demeter is the source of the name Demetrius. Then we have the fact that Marie remains a note-worthy middle name for the male population of France (think: Jean-Marie, Philippe-Marie), as a nod to the Virgin Mother.

A few months back I introduced a close friend to the anime show Sailor Moon. The show is based on the manga which is considered one of the defining works of the genre for it’s depiction of kick ass girls with magical powers using said powers to fight evil. Despite this, my friend was unimpressed with the amount of crying the titular character does, and much preferred Cardcaptor Sakura. However, he was a huge fan of the feline characters, who in the English translation are all given names related to the moon: Luna, Artemis and Diana. The cats can talk and dish out guidance to the troupe throughout the series; Artemis is a male cat, not female.

Outside of Japanese manga, the most famed use of Artemis in the UK is in children’s literature. The Artemis Fowl series of books are written by Eoin Colfer and first came to a good bookstore near you back in 2001, and the last one is made it’s début in 2012. The series of books has been compared to Harry Potter – but Mr. Colfer prefers for the series to be referred to as Die Hard With Fairies.

Artemis Fowl revolves around the antics of a teenage mastermind by the name of Artemis – a male teenage mastermind. It may seem odd to those with preconceptions that Artemis is a female name – the character himself mentions the gender dispute a few times – but Artemis was good enough to be given to one of Alex James’ twin sons. During the books, Artemis takes on an alter-ego named Orion, who is almost his exact opposite – notably being carefree and optimistic. Artemis was the Greek goddess of hunting, whilst Orion is the name of a legendary Greek hunter.

Despite all this talk of Artemis’ dude-cred, the name in 2013 only ranked for girls born in England&Wales at #1639. The Russian/Ukrainian/Belarusian name Artem, which traces it’s origins back to Artemis, ranked at #1539 for the boys. However, with a film adaption of the Artemis Fowl books in the pipeline, all that could change.

As for the origins of the name, it is possible that the name stems from the Greek: artemêse, meaning safe; artamos, meaning butcher; artios, meaning complete; artemia meaning recovery; or even arktos, meaning bear. Suffice to say, it’s pure speculation when it comes to the meaning as, with many aged names, this one’s is long lost with the passage of time.

A similar name to Artemis is Artemas, sometimes touted as the male form of Artemis, he actually derives as a short form of Artemidorus; he means gift of Artemis.

What you have with Artemis is an ancient Goddess name which in this day and age could work for either gender and as long as you’re not bothered by not knowing what exactly the name means, you’re sure to appreciate him/her.

Name Spot of the Week: Sailing Across the Sea

The Team GB Sailing Team for 2012, from dailymail.co.uk

A few days ago the Team GB sailing team was announced for the 2012 London Olympics. I’ll admit that I’m a rower, not a sailor – I was one of the many Brits who had never heard of the Yngling class of sailing until we won a gold medal in it at Beijing. For the 2010 Olympics, it’s being replaced by the Elliott 6m. Other names of sailing classes?

We have the Finn class which has been dominated by Ben Ainslie in the past few years. By coincidence, he’s been covered in much detail over at My Advice this week. A quick selection of the names of other classes in the world of sailing gives us: Tempest, Soling, Dragon, Firefly, Corsair and Buzz. If any sailors read this post, and are offended that I’ve missed out their class, I’ll repeat that I’m no expert in sailing, so feel free to add your own list in the comments section and put me to shame.

Sticking firmly to the sailing theme, the names of the sailers which have been selected are quite interesting – the stand out one for me being Saskia Clark. The other selected few were, in alphabetical order:

I’ve been hoarding Metro newspapers for the past fortnight of so, not just because I’ve yet to have time to the sudokus, but because I keep forgetting I’m holding them until it’s too late and I’m off the bus. Something I’ve been wanting to mention for awhile, though, is the name of one of the characters on it’s cartoon page: Nemi.

I have been reading the articles in the Metro though, and there was a new story in the Metro this week about a family who built their own ‘hobbit house’ in four months for a couple of grand. The creative parents behind the project, Simon and Jasmine Dale, have two young children: Cosmo and Elsie.

I casually mentioned Warby Parker as an inspiration behind a Names of the Week post from the start of the month, and this week Kristen over at Marginamia went one step further, bringing you the names of the entire collection.

Dancing with the Stars kicked off in the States this week, whilst we’re still waiting for Strictly Come Dancing to begin here in the UK. Not that I watch it, since dancing is for girls 😉 Either way, a quick rundown of some of the notable names of professionals who’ve taken part in the series at some stage or another:

Ice Hockey is more of my thing, even though I don’t own a season ticket as my Uncle does. I tagged along with him to the Panthers game last night, so now seems an apt time to mention that we have a player named Guillaume. I love the name Guillaume, sometimes more than William, sometimes less (Guillaume is the French form of William). For the confused, it’s gee-OM.