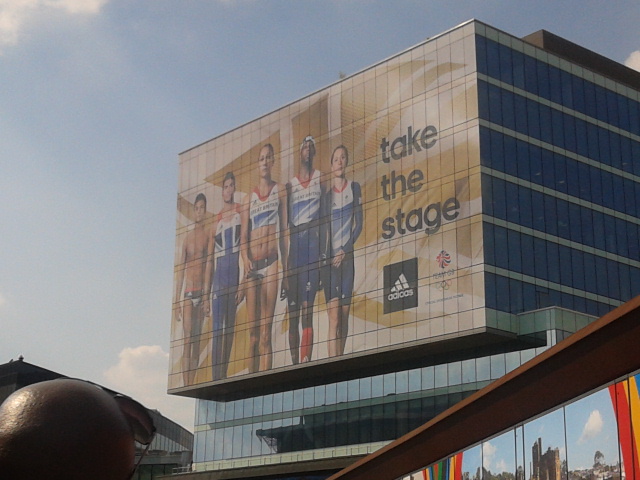 I was in London yesterday, once more, and was part of a screaming crowd moments away from the Olympic stadium watching the nearest TV when Mo Farah capped off a brilliant night for British athletics and for those interested, I’ve covered Mo Farah’s first name before: Mohammed. And indeed, I’ve also covered the name Jessica as inspired by another one of the gold medalists yesterday, Jessica Ennis.

For those interested in blog stats, page views for my post on the name Camille have gone through the roof since the Olympic swimming kicked off, courtesy of the French male swimmer Camille Lacourt.

That initially left me in somewhat of a predicament as it seemed like I’d covered the names of some of the big medal winners previously due to a rather annoying foresight.

Eventually I decided instead to pick out 5 surnames from members of Team GB who have so far won a medal, and hope that in the process of writing this post, our athletes would kindly not win any big ones (NB: but then Andy Murray had to go and thrash Federer about half an hour into the commencement of writing this post. Bah.):

Today, Ben Ainslie took his 4th gold in the Finn class of sailing. It has a link to my home shire too, because the name’s origins possibly lie in Annesley, Nottinghamshire. But it may also lie instead in Ansley, Warwickshire – which historically is the home shire for people from Coventry, such as lovely Elea of British Baby Names. However, back in the 1970s, Coventry became a part of the West Midlands county instead.

The name either means Anne’s field or hermitage field.

A man named Timothy Baillie and pal Etienne Stott took gold in the C-2 Canoe Slalom earlier on this week, with the other British duo of David Florence & Richard Hounslow taking the silver.

I wanted to mention this name because it makes a point about the spellings of names. Bailey is the most popular version of the name, ranking at #79 for boys in England&Wales in 2010, and the name means bailiff.

Jessica Ennis missed the Beijing Olympics due to injury, and she’s been the face of the London 2012 Olympics. A lot has been said about whether she’d be another Cathy Freeman (want to know more about her?) who was the face of Sydney 2000 and won her event, the 400m or another Liu Xiang; he was the face of Beijing 2008 and ended up pulling out after a false start aggravated an injury. There was speculation, however, that the pressure was a factor in his withdrawal. Happily, Jess fulfilled her dreams last night and took gold in the heptathlon.

We’ve talked about her first name previously, but consider her surname. Ennis, or Inis, is the name of a town in Ireland, and the name itself means island.

Mo Farah was born in Somalia, and came to the UK when he was 8. In 2011, he was voted European Athlete of the year and I’ll be surprised if he doesn’t get a BBC Sport Personality nomination at the end of the year following his 10,000 m win on Saturday as he was the first Briton to take the gold in the event. Want to see more Mo? He’s also due to run the 5,000 m.

As a link to another Team GB athlete, Mo Farah’s father comes from England originally, specifically from Hounslow. If you were reading carefully a few lines up you’ll know that a man named Richard Hounslow took silver in the C-2 Canoe Slalom.

Again, whilst Mohamed has been covered, Farah has not; it’s of Arabic origins and means joy. It’s also worth noting that Mo’s wife is also expecting twins in September, so congrats to them.

Well, the British Gymnastics team is having a good time as well aren’t they? Today we grabbed bronze & silver in the Men’s Individual Pommel Horse final, courtesy of Louis Smith (a bronze medallist in Beijing) and Max Whitlock. Both were also part of the almost-silver-winning Men’s team, until Japan complained.

A few weeks ago I covered the name Whitton, and if you combine him with the name of a legendary detective you get Whitlock. The surname comes from Old English and means white enclosure.

Congratulations to the wonderful athletes of Team GB and their amazing achievements.

Snapped by my father inside the Olympic Stadium last night

Name Spot of the Week: Sailing Across the Sea

The Team GB Sailing Team for 2012, from dailymail.co.uk

A few days ago the Team GB sailing team was announced for the 2012 London Olympics. I’ll admit that I’m a rower, not a sailor – I was one of the many Brits who had never heard of the Yngling class of sailing until we won a gold medal in it at Beijing. For the 2010 Olympics, it’s being replaced by the Elliott 6m. Other names of sailing classes?

We have the Finn class which has been dominated by Ben Ainslie in the past few years. By coincidence, he’s been covered in much detail over at My Advice this week. A quick selection of the names of other classes in the world of sailing gives us: Tempest, Soling, Dragon, Firefly, Corsair and Buzz. If any sailors read this post, and are offended that I’ve missed out their class, I’ll repeat that I’m no expert in sailing, so feel free to add your own list in the comments section and put me to shame.

Sticking firmly to the sailing theme, the names of the sailers which have been selected are quite interesting – the stand out one for me being Saskia Clark. The other selected few were, in alphabetical order:

I’ve been hoarding Metro newspapers for the past fortnight of so, not just because I’ve yet to have time to the sudokus, but because I keep forgetting I’m holding them until it’s too late and I’m off the bus. Something I’ve been wanting to mention for awhile, though, is the name of one of the characters on it’s cartoon page: Nemi.

I have been reading the articles in the Metro though, and there was a new story in the Metro this week about a family who built their own ‘hobbit house’ in four months for a couple of grand. The creative parents behind the project, Simon and Jasmine Dale, have two young children: Cosmo and Elsie.

I casually mentioned Warby Parker as an inspiration behind a Names of the Week post from the start of the month, and this week Kristen over at Marginamia went one step further, bringing you the names of the entire collection.

Dancing with the Stars kicked off in the States this week, whilst we’re still waiting for Strictly Come Dancing to begin here in the UK. Not that I watch it, since dancing is for girls 😉 Either way, a quick rundown of some of the notable names of professionals who’ve taken part in the series at some stage or another:

Ice Hockey is more of my thing, even though I don’t own a season ticket as my Uncle does. I tagged along with him to the Panthers game last night, so now seems an apt time to mention that we have a player named Guillaume. I love the name Guillaume, sometimes more than William, sometimes less (Guillaume is the French form of William). For the confused, it’s gee-OM.