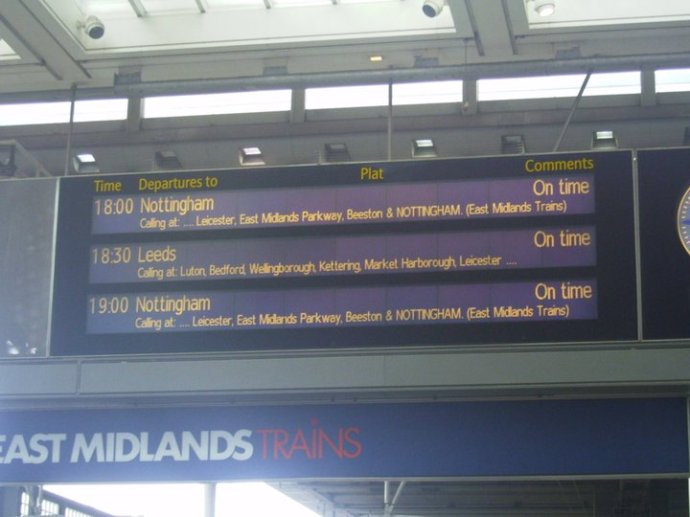 Where do you want to go? Snapped by me whilst waiting for our train back home.

Who the heck is St.Pancras?…to quote my brother, who said this yesterday. We were in the middle of booking our stay at the newly opened St.Pancras Renaissance Hotel, humming over whether or not to order extra fluffy pillows. It of question with a shred of intelligence behind it, and so I have decided to answer Jacksie’s question, so why does a major international station bear the rather unfortunate sounding name of a relatively unknown saint?

It’s quite simple really. The area in which London St. Pancras is situated is a district of the London borough of Camden known as St.Pancras. Although technically speaking, the district of St.Pancras has for many centuries been used for various officially designated areas, but today it is only an informal term and is rarely used, having been largely superseded by several other terms for overlapping districts.

And for those who are confused, the train station and hotel are situated on the same site. Part of the hotel is in old train sheds from the station. Albeit slightly spruced up.

Midlands Trains bought up huge amounts of the land in the district for the station to be situated on so it could run services to the capital, hence why St.Pancras is where the modern day East Midlands Trains services from places such as Nottingham and Leicester terminate. Which is fantastic for a midlands dweller such as myself, because I adore the architecture of St.Pancras station, I’ve heard it be described as the cathedral of all railways, which is great, because Nottingham Train Station is a bit of a dump (Nottingham used to have two train stations, they kept the ugly one, and built a ghastly shopping centre onto of the nice one they knocked down) at the present moment.

The area itself is named after St.Pancras of Rome, who converted to Christianity, and was then beheaded for his faith at the rather youthful age of 14 circa 300. His name is Greek, and quite literally means the one that holds everything.

3 thoughts on “Weekend Post: Who the heck is St.Pancras?”